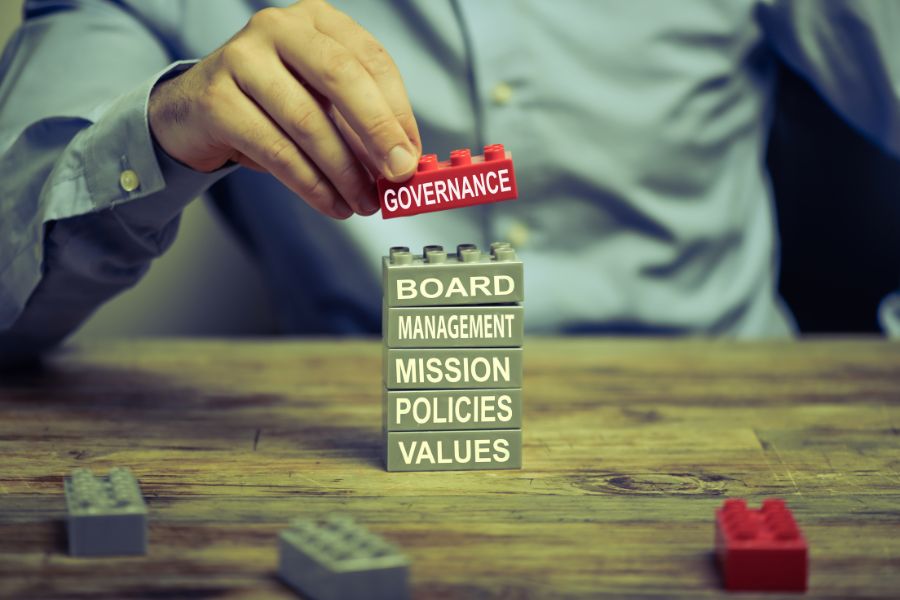 “Corporate governance” refers to the rules and oversight that dictate how a company operates, and how effectively those rules and regulations are implemented.  One goal of good governance is to align the interests of various stakeholders, including shareholders, employees, and customers. This involves meaningful internal controls, ranging from enforcing policies against harassment and discrimination in the workplace to preventing employees from engaging in accounting shenanigans, and so on.

Governance also covers a company’s public behaviors, such as preventing employees from posting something embarrassing or even illegal on a company’s social media accounts, or setting expectations for executive behavior in public, when they are representing the company.

Corporate governance failures can be costly when breaches violate law and regulation and result in monetary fines. Perhaps even more value-destroying is the reputational harm and subsequent loss of trust such failures cause in customers, employees, and investors. When we say “costly,” we mean it – corporate governance scandals have wiped out billions for shareholders, sometimes leading to bankruptcy.

Here is a brief trip down memory lane, looking at three of the biggest corporate governance blow-ups in the 21st century thus far. Hubris is the road to ruin, and these cautionary tales serve as a reminder for those who remember them splashed across headlines, and a lesson to those who were not focused on business developments when they happened. We then offer guidance from an expert on the five mistakes boards often make, but can definitely avoid.

Perhaps the most notorious example on any list of corporate governance failures, Enron was an energy sector giant adored by Wall Street as a true innovator. In August 2000, Enron had a market capitalization of $70 billion and was outperforming the S&P 500 by over 200%. Fifteen months later, the company was bankrupt. In early 2001, analysts questioned some accounting practices shown in the company’s latest Annual Report. An investigation by the U.S. Securities and Exchange Commission (SEC) revealed that Enron was concealing billions of dollars of liabilities and toxic assets using non-standard accounting and special purpose vehicles.

Without getting into the details, Enron was claiming forecasted profits from projects, even those that had not yet generated any revenue! If the actual revenues were less than what it had forecast, Enron transferred the asset to an entity that was off its books, so the loss was not reported. Entangling its (ahem) “independent” auditor in its web of deceit, Enron had pressured Arthur Andersen, which had been a top audit firm, to ignore these accounting irregularities.

Fast-forward a few months – Enron’s share price plummeted to $0.26 and shareholders filed a $40 billion lawsuit. Enron filed for bankruptcy on December 1, 2001, the single largest corporate bankruptcy in U.S. history at the time. Arthur Anderson disbanded. The scandal led to the Sarbanes Oxley Act, passed in 2002, to protect investors from fraudulent financial reporting.

This once-venerated firm that traced its roots back to the 1850s filed for bankruptcy on September 15, 2008, as the global financial crisis related to the sub-prime mortgage era was unfolding. By 2007, Lehman had amassed a portfolio of mortgage-backed securities valued at $85 billion, four times the value of its shareholders’ equity. To disguise some of this leverage, Lehman entered into agreements with banks in the Cayman Islands that effectively transferred some of the firm’s liabilities, agreeing to repurchase them later. By manipulating accounting standards to record these agreements as sales, the company obtained cash in the short run without recording any liabilities.

When real estate values began to fall and credit markets tightened, Lehman could not make good on those repurchase agreements. The firm filed for bankruptcy, sending shockwaves through financial markets. The question of whether any firm is “too big to fail” is now firmly associated with Lehman and its lack of corporate governance.

Volkswagen – In September 2015, the U.S. Environmental Protection Agency (EPA) announced that Volkswagen had installed software in diesel cars to defeat emissions testing. This was a major embarrassment, as well as a financial disaster, for the German company that was seeking to become the world’s biggest car manufacturer. Talk about blind ambition…

The software, called a “defeat device”, recognized when a car was undergoing an emissions test. Volkswagen had intentionally set emissions controls in its diesel engines to turn on during testing, allowing the car’s output of nitric oxide to conform with U.S. standards during testing while emitting up to 40 times more when driving on the road. This defeat device was installed on 11 million cars worldwide between 2009 and 2015. Volkswagen paid a heavy price for its governance failures, including a massive $18 billion fine imposed by the EPA. Volkswagen’s shares plunged 30% in the aftermath of the scandal, a loss of over $26 billion in value. The public relations impact was devastating, as consumers saw VW as deceitful and untrustworthy.

Those stories are the headline grabbers that result in massive fines and huge reputational damage. When the fines go into the billions, the regulatory intervention is substantial, and the reputational damage is profound, as in cases involving Pfizer, Wells Fargo, Equifax, and too many others, the failure is so egregious that it’s hard to imagine that someone at the top management of the firms had the audacity to push the idea (or the coverup), and that others went along with it.

Take Sports Direct, a huge UK-based sporting goods retailer. In 2015, an exposé revealed dangerous working conditions in the company’s warehouses, pay violations, and other problems. The board of directors had failed in its fiduciary duty to oversee and ensure safe working conditions for the company’s employees, allowing the CEO to create a culture that pursued profit above all else. After the story broke, the board and others created policies allowing employees to file anonymous complaints and ensuring adequate inspections of the company’s facilities.

The Sports Direct story is a reminder of the value of good corporate governance at the board level. An article from Board Outlook points out that this requires robust discussions among people with diverse skill sets. It lists five corporate governance mistakes that often prevent those robust discussions from happening. We think companies should discuss them at their next board meeting, and investors should look for portfolio companies to detail governance practices and controls during next year’s proxy season:

1. Choosing members who fit the norm

The article points out that board members are often selected informally, and since we humans tend to gravitate toward others who are like us, boards run the risk of ending up with few, if any outliers. Board members who are “non-conforming” are often marginalized or pressured to conform, to “get along,” making it difficult for anyone to challenge the status quo. That weakens the quality of the debate and decisions a board makes, and can interfere with the board’s responsibility to restrain irresponsible actions by management.

“Diversity” means more than gender and cultural diversity; it should also include diversity in terms of experience and background, thinking styles, and approaches to problem-solving. Tokenism is not true diversity. Appointing a woman or a person of color, but not paying much attention to what he or she says defeats the goal of diversity and encourages “groupthink,”, which can be the road to ruin.

According to the article, companies often appoint board members with financial backgrounds. That means finance can dominate board discussions while other issues receive inadequate attention. Critical issues such as strategy, cybersecurity, workforce turnover and safety, and customer satisfaction can be overlooked. This gets back to the importance of board diversity.

4. Selecting celebrities instead of team leaders

One of the biggest mistakes the article calls out is appointing a “celebrity” board chair instead of a true team leader. The chair should not be the opinion leader; he or she should focus on getting the best out of the other board members. That includes encouraging them to challenge assumptions and express “outlier” points of view.

Compensation committees often focus only on pay for senior management. Instead, this article says they should analyze the compensation structure across the entire company. While this may be a big undertaking at large companies, compensation committees can still look at the ties between company pay strategy and performance. When employees feel the organization is not treating them fairly, they have no loyalty. That is risky, especially since disaffected employee can take photos and videos in the workplace and post things on social media that embarrass the company and harm recruitment efforts. Additionally, a company where employees feel neither incentivized nor rewarded fairly are not likely to be top performers.