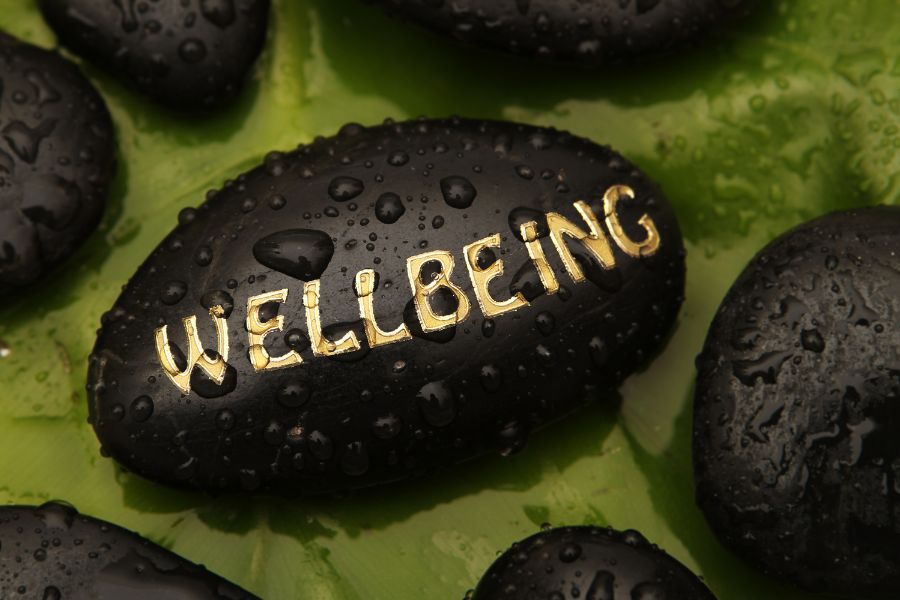 Workplace stress is not a new phenomenon. The term “stress” (borrowed from physics) was first applied to humans in the 1920s, and the American Institute of Stress developed its Workplace Stress Scale in 1978. Post-pandemic, there are new aspects to workplace stress for employers to consider. For example, “hybrid workplace anxiety” (we think we just coined that phrase and might copyright it) arises when an employer is flexible about working from home and employees have to figure out how to divide their time between WFH and going into the office (you don’t want to risk not being there when key interactions take place but also don’t want to sit alone in a mostly empty office). And, for those who are immunocompromised or live with others who are, the threat of COVID is still present.

A study conducted by Deloitte confirms that employees’ sense of well-being, or lack thereof, is a problem for their employers, even if those employers don’t realize the problem exists. According to Deloitte, only 59 percent of employees who participated in the study said their well-being was good or excellent.

The factors that were most commonly cited as contributing to a lack of employee well-being are not new either, and apply to both employees and executives: a heavy workload or a stressful job (cited by 30 percent) and not having enough time because of long work hours (27 percent). In a survey of 2,100 employees and C-level executives across four countries Deloitte and Workplace Intelligence found that almost 60 percent of employees and nearly 70 percent of C-suite executives are seriously considering quitting for a job that better supports their well-being.

Here’s another new-ish term related to this topic: Presenteeism. It refers to the state of being physically present at work in order to appear dedicated, but being unproductive much of the time. Presenteeism can be the result of physical illness – some employees feel pressure to come to work even when they are not well enough to do their jobs – but it also applies to those who are mentally “checked out”. A pre-pandemic survey in done in the UK showed that 80 percent of workers said presenteeism existed in their workplace, and the Harvard Business Review has estimated that presenteeism costs the U.S. economy roughly $150 billion a year in lost productivity, far surpassing the cost of actual absenteeism.

Is workplace stress a generational thing?

As noted above, work-related stress is not new — there have always been competing, incompatible priorities in our lives. What is, perhaps, a new development is that younger generations are less willing to continue in jobs that constantly interfere with their other priorities. In 2022 the term “quiet quitting” became part of the workplace vocabulary, but actual “I’m outta here” quitting continues to be a real problem. A Randstad study showed that 56 percent of employees age 18–24 would quit a job that prevented them from enjoying their lives, and 38 percent of those age 55–67 agreed.

Contributing to the seriousness of this issue, demographics suggest the labor market is likely stay tighter than in previous generations as baby boomers retire and birth rates in developing countries remain low.

Previous generations may have been more willing to accept that their jobs involved stress and long hours. However, living under constant stress creates all kinds of problems that interfere with work, including divorce, substance abuse, and physical and mental health issues. The fact that a large number of younger employees are pushing back on what had been the “status quo” is worthy of management’s attention, because problems caused by stress negatively reduce productivity and increase health care costs. That means employers who take steps to reduced stress and long hours can increase productivity and reduce health care costs. In other words, investing in a solution can improve profitability.

The upside of improving employee well-being is compelling. People want to work for companies where workers thrive. Fifty-nine percent of employees surveyed in the Deloitte study said they would seriously consider taking a job with a company that offers better well-being benefits than their current employer. Employees that feel good about their job and organization are likely to be more productive, pay more attention while on the job, and provide better customer service. That supports product/service quality and makes a company more attractive to customers (and investors).

To manage employee well-being you have to measure it

Having said that, it’s not easy to measure worker well-being. It’s one thing for employers to invest in improving employee engagement and tracking the use of various employee benefits, but that doesn’t necessarily provide a reliable indication of whether well-being is high or low.

Furthermore, views on employee well-being can be heavily influenced by anecdotes published on platforms ranging from Glassdoor to Instagram. Unfortunately, these sources tend to skew negative, as disgruntled former employees, regardless of the source of their dissatisfaction, are more likely to post comments than employees who are generally satisfied with their work and their employer.

Could organizations offset the impact of those negative comments by publicly reporting metrics about their workforce’s well-being? According to Deloitte, there is a desire to see this kind of information, and there are potential benefits to publishing it. The survey says that 55 percent of the employees and 77 percent of C-suite executives believed that companies should be required to publicly report workforce well-being metrics. A majority of both employees and executives said they would trust their company more if it did so, and would be more likely to take a job with a company that published this type of information.

As environmental, social, and governance (ESG) reporting evolves, workforce well-being metrics would be a natural addition to the type of information that allows comparison on other ESG dimensions. What would well-being metrics look like? Assessing workforce sentiment with surveys and interviews, tracking the number of hours worked outside normal work hours, or the volume of work emails sent on weekends could be useful.

While there is a danger that some managers might pressure employees to respond favorably in surveys about the company’s efforts to support their well-being, that almost certainly would backfire. Perhaps a machine-learning approach could be developed, but that could suffer from biases in the data used to train the algorithm. Nonetheless, just because something is hard doesn’t mean it can’t be done, and the tangible benefits to employers of a truly present workforce make it worth the effort.

OWL ESG scours a wide range of data sources to gather information about how a company promotes employee satisfaction through fair pay, benefits, and other practices that encourage productivity. Contact us to learn more about our offering in this area, and about all of the E, S, and G data points and metrics we offer.